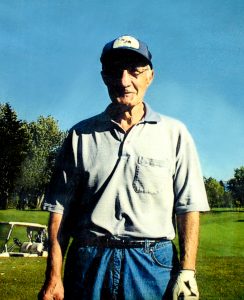 It is with deep sorrow that we announce the passing of our loving Father and beloved Grandfather, Carl Stefanik of Kamloops on June 26, 2022 the age of 88 years.

Carl was born on March 19, 1934 in Gainford, AB, growing up on a farm. He did many farm jobs as well those of faller, skidding logs with horses, and later meeting his future wife Patricia, while driving taxi with Patricia having been the dispatcher.

Carl worked at Valley Concrete in Mission Flats for approximately 20 years. He went onto work for CNR from 1981 – 1990 when he officially retired but kept busy doing odd jobs, as keeping busy was a must for Carl.

He loved active sports, playing on softball, hockey and bowling leagues. Carl also enjoyed tennis, pool and his weekly poker games with his friends, but Carl’s main love was for the game of golf.

Carl’s other interests were in his vegetable garden (which he offered to family and friends) and self-taught wood working projects. He built many projects over the years for his family and friends.  Carl taught a lot to his children and grandchildren about doing the job right. There wasn’t anything he could not build.

Many thanks to Trinity Hospice for their warm support through the last days.

DAD taught his children and grandkids many valuable lessons throughout the years, about the value of family and working hard. “Same here.”

We want to thank Dad for making sure we tried our best and that he was a strong pillar in our family.