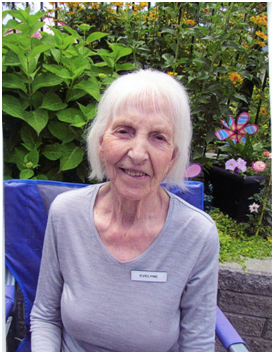 Evelyne Irene Imeson (Johnson) of Kamloops passed away on January 30, 2018 at 93 years of age. She will be mad at me for telling you her age. She is survived by her only son Brett (Lisa Imeson) also of Kamloops, her grand-daughter Rae Imeson (Josh Cyr) of Kelowna and her grand-son Mathias Imeson (Jamayca Kisil) of Kamloops, and her younger brother Edward Johnson of Vernon, B.C.  Evelyne will be missed by a large extended family in B.C., Alberta, and the United States. She is predeceased by the love of her life, Raymond Imeson, her parents Mattias and Christine Johnson, brothers Norman Johnson, and Floyd Johnson and her sister Hazel Sederstrom.

Evelyne was born in Onoway, Alberta in 1924. She grew up on a farm in Rich Valley, Alberta. Shortly after graduating from high school Evelyne took her teacher training, with her first position taking place in a one room schoolhouse in Rich Valley.  After marrying, Evelyne and Ray moved to California to be  closer to her sister Hazel and Hazel’s family. Shortly after Brett was born she and Ray returned to Canada, living in Kamloops B C, to be closer to their families while Ray was ill. While in Kamloops Evelyne made many friends. She will be remembered for her skills in cooking, baking, painting, sewing and real estate. Evelyne was always up for adventures and spent many winters in Venture Out in Mesa, Arizona. While in Mesa, Evelyne took part in lawn bowling, tennis, hiking and wood carving.

Over the past few years Evelyne stayed in Kamloops, spending time with her son and his family. Evelyne was a devoted grandmother, taking Rae and Mathias on little adventures, and sharing her love of art and games.

Brett and his family would like to extend heart filled appreciation to the staff at Pine Grove Care Centre especially Grace, Kristin, Alyson, Indu, Abby and Heather, and Kamloops Seniors Village as they cared for Evelyne with love and compassion.

There will not be a service at Evelyne’s request. In lieu of flowers donations to the Heart and Stroke Foundation in Evelyne’s name would be welcomed.