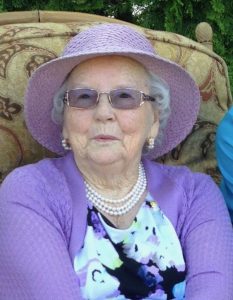 With great sadness, we announce the passing of Eleanor May White (O’Hara) on November 8th, 2021. Left to mourn are her 9 children: Nancy (Jerry), Marj (John-2018), Marty (Lily), Mary-Jo (Ron), Gordie, Kathy (Dan), Frank, John (Barb), and Colleen. She leaves 24 grandchildren, 36 great grandchildren, and 7 great, great grandchildren. She always remembered everyone’s birthday including their spouses. She will be missed by so many more than we can mention. If you met Eleanor you were her friend. She was predeceased by her first born Terry Orville in 1946. Her first husband Orville Wesley passed away after 46 years of marriage in 1991.Three years later she remarried another good man, Vernon Warren. They started out travelling the country in their RV. Sadly he died after only 15 months of marriage.

Eleanor was born in Castor, Alberta, in 1926 and spent most of her childhood years in Owen Sound Ontario. Eleanor always had an adventurous spirit, in 1943 at a mere 17 years old, she trained as a stenographer then fearlessly left home and joined the war effort in Ottawa; working in the war offices. After marrying, Eleanor and Orville started to have their children, they lived in several different provinces before settling in British Columbia for the rest of their lives. Eleanor possessed the Irish wit in abundance; she was true to her Irish heritage, and she loved to make people laugh.

Eleanor returned to the work force and until 1981 worked with the RCMP’s Security Intelligence Service division, here in Kamloops. When she was asked what she did exactly, her response was always “the secrecy of my job prevents me from knowing what I’m doing” We’re all pretty sure she was a secretary, we think. After retiring Eleanor somehow talked Orville into buying the Wildwood Fishing Resort, at Loon Lake, BC. “Something to do in retirement” she said. But it was a lot of work! Many family members have fond memories of helping with the day-to-day operations, throughout the years.

Eleanor has a zest for life and travelled to Russia and Ireland in her quest to see the world. She loved to tell people she was the same age as the queen and had the royal wave down to perfection. She drove across Canada at the age of 75 so she could see the pope in Toronto.

Eleanor’s motto was “A stranger was just a friend she hadn’t met yet” Even up to the end Eleanor’s quick wit was to be admired. She loved to talk and tell beautiful stories. One story Eleanor loved to tell was when she was president of the Kamloops Bantam Hockey Tournament’s Women’s Auxiliary, she was over the moon when not only did Prime Minister Trudeau Sr. attend a game, but she got to serve him and his wife tea. And yes, she made them laugh too!

We have comfort in knowing that our dear Eleanor received wonderful care and attention from the staff at Overlander extended care. We are forever grateful for the staff working on the Orchard Grove wing. We saw your love and we thank you. You know how special you were to her.

While we are grieving, we are thankful to have had this wonderful woman in our lives, she will be missed. The family is very grateful for the devotion Marj gave to Eleanor in her later years. We are also thankful that Marj and Lily were able to hold her hand as she passed.

We will celebrate her life in the spring, at a place she loved, the White house on the river. 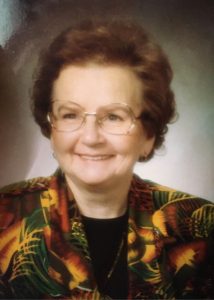