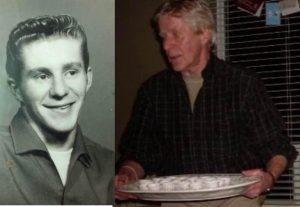 Dad is survived by his daughter Kelly, and the four grandchildren he adored Jadie, Shae Lyn, Koda Bear , and Jackson as he called them- who all have good manners mostly because of how important that was to their much loved Papa.

Dad was the oldest of four siblings and is survived by his brother Bub, and sisters Charlotte and Deed, as well as many in-laws nieces and nephews that he loved.

Predeceased by his True Love ,his wife Jackie and his beloved son Billy, as well as his parents Laura and Bill , and brother in law Larry.

Dad grew up in Surrey, he recently told me about how he rode his Norton Motorcycle to Tijuana Mexico as a teen .He met Mom in Hedley where she lived next door to his Grandparents.

We lived in Vancouver where he worked in saw mills and then moved to Kamloops in 1976 where he worked at Tranquille , and then managed a group home in Iqaluit, when they returned to Kamloops he was a residence worker for Thompson. He had many people that he met through work who respected and cared about him , your kind words have meant so much. It was hard for him to reach out but that was no reflection on how he felt about people.

Dad was a talented musician playing the accordion at a young age, as well as the organ and guitar -and the piano very well to my surprise .I found this out when he sat down at an outside piano on the streets of downtown Kamloops a few years ago , and played while we were going to an appointment. I remember that day so fondly because he was so lighthearted.

Life after losing his wife and then son was very difficult for Dad . He had a hard time finding peace .

It was a privilege to be his daughter ,I was so proud of who he was. A good man who knew adversity and how to make you feel better on your worst day. I watched while he called a homeless man to his truck to give him a pack of cigarettes and 20 dollars saying “ have a good day Guy”. That’s who he was. His grandaughter Shae pointed out : “He had an intuitive read on people, he didn’t realize the impact his quiet wisdom had on the people around him.”

He was cool, and if you weren’t in his opinion you probably knew it. He was a badass till the end, telling it like it was, living life on his terms. I called him my favourite Senior Delinquent and he was proud of that because he knew it was true.

Rest Easy Pops ,we will never stop missing you.

Thank you to Dr. Newmarch for the care over the years and Dr.Jiao, Dr.Lee, and Dr. Morrow.

Thank you to the staff at the Freshco pharmacy who always went above and beyond to help .